The Allegheny City Society has established the William Rimmel Award to recognize and honor an individual or organization for outstanding achievement in preserving and interpreting the history of that portion of the City of Pittsburgh that was the City of Allegheny. 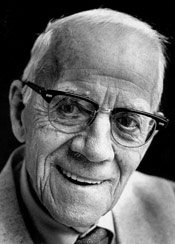 William M. Rimmel, a lifelong resident of the North Side, was best known for the series of columns he wrote about life in Allegheny City. These columns earned him the President’s Golden Quill Award in 1980 from the Pittsburgh Press Club.

Born in 1897, he was self-educated. He left school after the sixth grade because his family needed the money, becoming a copyboy for the Tri-State News Bureau at the age of 11. That job paid him very little, although his employer did give him a raincoat for his deliveries to the downtown newspapers.

In 1915, he joined the Pittsburgh Post, a predecessor of the Post-Gazette and later switched to the Gazette-Times, which offered him more money. After several years, he was promoted to police reporter at a salary of $12.15 per week.

Over the 15 years that he held that job, he got to know thousands of people. In 1925, he began to handle general assignment reporting and he extended his circle of acquaintances to Downtown politicians, businessmen, industrialists, civic leaders, and bootleggers (sometimes not different people). In 1928, he became assistant city editor and held that position for 30 years.

After retiring in 1962, he continued to write his columns and maintained a busy schedule of meetings, speeches and writing. He was the author of “The Allegheny Story”, a nostalgic look back at Allegheny City. He died in May, 1988 and is buried in Union Dale Cemetery. So we guess we could say that his remains remain in his beloved Allegheny.