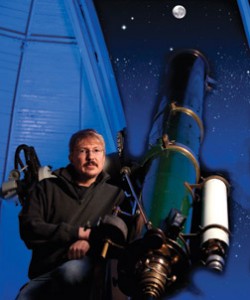 The Allegheny City Society is pleased to present the 2013 Rimmel Award to Dan Handley.  With the release last year of his excellent documentary Undaunted: The Forgotten Giants of the Allegheny Observatory, Director Dan Handley has decidedly met the criteria “…for outstanding achievement in preserving and interpreting the history of that portion of the City of Pittsburgh that was Allegheny City.”

In the film, Dan traces the beginnings of the observatory, depicting the founding of the Allegheny Telescope Association and the construction of the first observatory in Perry Hilltop.  Through skillful weaving of interviews with top scientists and historians, 3D animation, accurate historic re-enactments, archival photographs and Kathy Rooney’s digital illustrations, we learn of the growth of the observatory through the contributions to science of the renowned directors: John Brashear, Samuel Langley, and James Keeler.

Birthplace of astrophysics, the Allegheny Observatory was the site of the invention of railroad standard time as well as Langley’s early aerodynamic experiments.  Undaunted also shows that through the work of Brashear, experiments that helped prove Einstein’s Theory of Special Relativity were made possible.

The film has been broadcast on American Public Television, and subscribing cities across the nation have been made aware of the important role that the city of Allegheny played in the history of science.