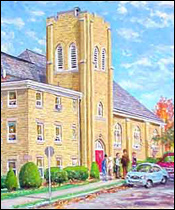 Jane Johnson was born on the North Side about a decade after Allegheny City was annexed by Pittsburgh. Except for a brief period when she and her husband Ross settled in Bedford, Pennsylvania, Jane has lived in a number of North Side neighborhoods. Recently she moved into a lovely apartment in The Allegheny on the site what early Alleghenians called the Second Bank.

Jane’s grandfather, Joseph Ford had emigrated from Ireland to Allegheny City in 1849 during the horrible years of the potato famine. Joe Ford settled in the Fourth Ward of Allegheny and established himself in the hauling business, eventually known as Excelsior Express Company. This company was eventually part of the Railroad Express Agency, Joseph Ford married Annie Daeveritz (Dev-ritz) the daughter of immigrants from the Kingdom of Saxony. The Daeveritz family home still stands at the foot of Troy Hill Road. That’s the old canal house that’s boarded up waiting demolition as part of the Route 28 widening.

Jane grew up in the Perry Hilltop community and graduated from Allegheny High in 1939. Shortly thereafter she married Ross Johnson, an outlander from the Windgap area, long the western “frontier” of Pittsburgh. Jane and Ross raised a family of 5 children in their home on Western Avenue. As a tireless community activist, Jane helped organize a neighborhood group in the late 1960’s. It was Jane who suggested the term Allegheny West as the name for their community.

Jane joined the Calvary Methodist Church in 1932 and for the past 70 years she has taken an active role in the programs and preservation of that Allegheny landmark. For several decades she has told the story of the congregation, the building, and the magnificent Tiffany windows. Whether as a docent for PHLF tours or those of the Allegheny Preservation Society or as the kick-off speaker for the Allegheny West house tours, Jane has uniquely blended together the history of Allegheny City with that of Calvary Church.

She has definitely employed Bill Rimmel’s approach of interpreting the history of Allegheny City’s people and institutions in a sensitive and a personal manner to thousands of people. The Allegheny City Society owes much to Jane in that she has kept alive Allegheny’s story.