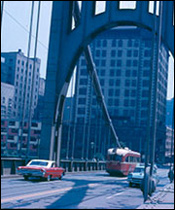 Albert was born in the neighborhood of Manchester. His father owned a building on Reedsdale Street and managed a bowling alley in it. Al’s father had come over from Lithuania as a boy of twelve years old. When he arrived at Ellis Island, where he was supposed to be met by HIS father, no one was there to meet him. A social worker was going to place him with a foster family in Connecticut, but somehow he got sent to Pittsburgh, where his father lived. He wound up on a streetcar, unable to speak English, going to Woods Run. On the streetcar were two people who spoke Lithuanian and who happened to know his father and got them reunited.

Al was a member of the Allegheny High School graduating class of January, 1942. He served in the US Army in 1943-45 and was stationed in Hawaii. After the war, he was reluctantly dragged to a church sponsored dance at the North Avenue YMCA where he met a young lady named Lois. They dated for two years, got married and moved to Fineview and later to the North Hills. I understand he can tell you exactly how many days have past since they were married. (But can he tell you how many hours it’s been since he moved out of the North Side?)

Al went to Carnegie Tech on the GI Bill and had a long career at Duquesne Light as a chemist. At Duquesne Light, one of his jobs was to photograph and document various buildings the company was working on.

In the 60’s, he became disturbed to see the beginning of the destruction of the Northside and began taking pictures of the places he knew and loved when he was growing up. He says, “They were part of my life.” On Sunday afternoons, he would drive down to the Northside, stand on a corner and take slide photographs. On one Sunday, he walked across the “Bridge to Nowhere” and saw the car that had gone over the edge. But he didn’t want to lean over to take the picture.

One of his photographs became the poster image for Rick Sebak’s “North Side Story&. He and his wife are both in the video (along with our other star–Mary Wohleber).

Just think, if the social worker had her way, we would be honoring Al for his slides of Hartford, Connecticut.