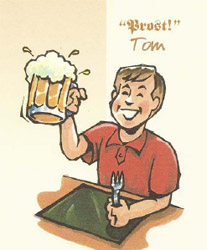 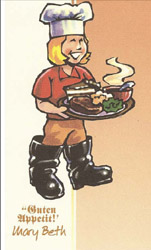 The Allegheny City Society is pleased to present the 2010 Rimmel Award to Tom and Mary Beth Pastorius.

Tom and Mary Beth Pastorius had spent over a decade in Germany when they returned to the states and settled in the Pittsburgh area. It was during those years that Tom developed his appreciation for the fine beers produced in small breweries throughout central Europe.

In 1986 Tom took a major giant step for Pennsylvania when he opened the state’s first micro-brewery within the abandoned historic facility of the Eberhardt and Ober brewery at the foot of Troy Hill Road. The “E &O” brewery, established at that site in 1848, was one of a number of family owned breweries located in the eastern wards of Allegheny City. By selecting that historic site the Tom and Mary Beth made a significant step in drawing folks to the North Side for the award winning beers produced by the Penn Brewing Company.

Three years later, in 1989, under the watchful eye of Mary Beth, the Allegheny Brewery and Pub, a wonderful restaurant serving German specialties, opened its doors. This was the first Brewery-Pub in the state since the onset of Prohibition.

In the ensuing years Tom and Mary Beth’s commitment to the brewing of quality beer and provision of wonderful meals created a true sense of Gemichlichkeit (gay-meekly-kite) to their corner of Allegheny City’s “Dutchtown.”

A few years ago, Tom and Mary Beth opted to move-on to a retired role in the operation of the Penn Brewing. However, when the new owners began making decisions that threatened both the operation of the brewery and the restaurant at their historic location, the Pastorius’ sense of place and quality brought them back to the North Side. These “Come Back Kids’ played a pivotal role in keeping Penn Brewery as an important feature on the North Side landscape.

Tom, by the way, is the direct descendent of Franz Daniel Pastorius, who led the first migration of German speaking settlers to the newly founded colony of Pennsylvania and Mary Beth is one of our region’s ardent historic preservationists. It is this sense of historic roots that would have made them the center of many articles by the likes of William Rimmel.