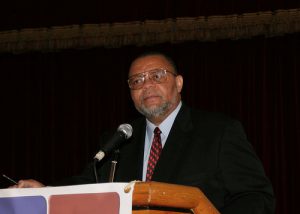 The Allegheny City Society is pleased to present the 2010 Rimmel Award to Stanely Lowe.  Throughout the past 30-some years Stanley Lowe has played an integral part in Manchester’s role as the “Phoenix of the Northside.”  Lowe’s lifetime in Manchester coincided with efforts by urban renewal forces that cut the very heart out of Manchester.

More than 164 acres of land were cleared, 900 buildings were demolished, and more than 950 families were displaced to make room for the construction of Route 65. Lowe, along with many other Manchester residents, was determined to fight back against the forces that would have destroyed one of the largest neighborhoods on the Northside.

In the ensuing decades Lowe’s commitment to community preservation took him into leadership roles within the Manchester Citizens Corporation, where he championed efforts to end disinvestment in Manchester and encouraged public and private reinvestment.

Lowe worked hand in hand with the Pittsburgh History and Landmarks Foundation in helping folks to better appreciate the architectural beauty found throughout Manchester. This joint effort led to Manchester becoming one of Pittsburgh’s earliest historic districts.

Even today, Manchester is one the largest historic districts in Pittsburgh. This identity, along with the fact that a majority of residents in Manchester are African-American, contributed to Stanley Lowe’s emergence to a leadership role with the National Trust for Historic Preservation.

Lowe’s role to improve the quality of life for Manchester residents and to champion the cause of community preservation continues to this day. It is through Lowe’s efforts and others within his community that many 19th century homes have been restored and that new houses have been built, providing homes to many working families in their neighborhood.

Lowe is the Director of Neighborhoods and Planning Policy for the City of Pittsburgh. Building on his training in history and economics and his experiences as director of the Preservation Loan Fund for the Pittsburgh History and Landmarks Foundation and CEO of the Manchester Citizens Corporation, Lowe is an energetic and vocal advocate for the revitalization of inner-city neighborhoods. He emphasizes partnerships involving neighborhood residents, lenders, preservation groups, elected officials and the business community. Working together, those partners can preserve and revitalize neighborhoods, including expansion of homeownership opportunities for low- and moderate-income residents. Lowe has received city, state and national honors for his work in Pittsburgh, including awards from the Pennsylvania General Assembly, the National Building Museum and the National Trust for Historic Preservation.

There is little doubt that if William Rimmel were reporting about present day happenings on the Northside he would have been writing articles about Manchester featuring the dynamic leadership of Stanley Lowe.